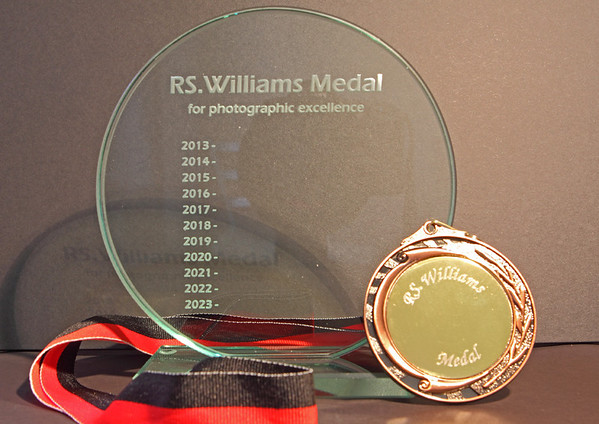 The RS.Williams Medal is sponsored by us and is awarded annually (usually in the autumn but may move to spring time) at the little Bookham Agriculture Bureau Show in April. The award consists of a medal for the winner and a perpetual glass trophy (both shown above), the award is only open to amateur photographers and the winning photograph must be the 'bona fide' product of the contributor and be an example of their recent work. An independant guest judge selects the winning exhibit for this award, which is open to both senior and junior contributors equally. Maximum size of photos is A4 or approximately 8"X11" and exhibits may be colour or black & white and securely mounted on thick card of roughly 10"X13" size, they may be either digital or traditional dark-room photos. The trophy is awarded for excellence in photography and is not restricted to any particular genre of the art. We now provide an additional award for professional and semi-professional photographers who are self- employed or employed by Fairfax Regional Media and Independent Newspapers at the same show. This award is titled "The 1PPP" and is exclusively available both to Fairfax and Independent journalists and photographers in the Yass/Boorowa/Harden area.